The Lie
Back in the early to mid-90’s there was a clothing brand that came out that seemed to take the world by storm for a little while. The clothing brand was called No Fear (logo pictured above). The No Fear brand was related to extreme sports and the idea that those who wore the logo had “No Fear”. Everyone was wearing their shirts with these two words were printed on each shirt. The answer is yes, I had one! Actually I had more than one but I did have one that was my favorite. This one No Fear shirt was related to the game I love, baseball and I wore it all the time. I even bought a vinyl decal sticker for the back of my white 1995 Chevy S-10. I was declaring to the world that Jacob D. Ricker had NO FEAR! However, nothing could be further from the truth!

Boy how naïve I was back then. If I was truly honest with my 20 year old self, and really today, I would have to say that fear is one of my biggest issues in life. Truth be told, I am not the only one who suffers from fear. I believe that everyone is afraid of something. We all have fears in our lives and it really has jacked up people’s lives! 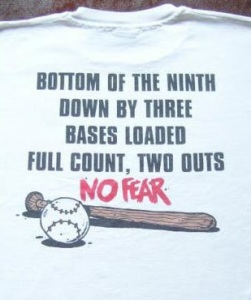 This was my favorite NO FEAR shirt!

The Problem
The Problem with fear is that it immobilizes people. Fear will cause us to become paralyzed where we cannot move at all. There are tons of sayings that deal with fear that give us this idea of being paralyzed. Such as:

When something jumps out of the dark and it scares us, our immediate response is to tense up and freeze. Fear causes a person to panic and they are not able to think clearly. It can become very dangerous. This is the same effect that fear has in the life of the believer, especially. when it comes to serving Christ! We see this throughout the scripture due to the fact fear has been around for a very long time.

The History
When do we first see fear? Well, that is an easy one. We see fear “In the beginning…” Really? Yes, it is true. Mankind’s first dealing with fear appears with the first man, Adam in Genesis 3 during the fall of mankind. “And he said, “I heard the sound of you in the garden, and I was afraid, because I was naked, and I hid myself.” (Italic/bold my emphasis) Genesis 3:10 (ESV). Since that fateful day fear has been place in the hearts of mankind and we see this truth throughout scripture. Here are just a few examples:

Moses was afraid of failure when told to go to Pharaoh to let God’s people go (Exodus 20)
Gideon was afraid because he thought he was to small and weak (Judges 6)
Abraham was afraid that Sarah would be taken from him and he would be killed (Gen. 12:10-13)
Elijah feared Jezebel would kill him. (1 Kings 19:2-3)
Nicodemus was afraid to meet with Jesus during the day. (John 3)
How about the disciples? They all deserted Jesus after He was arrested.
Peter’s Denial of knowing Jesus and being one of his disciples. (John 18:15-27)

Each of these Godly men was gripped with fear, paralyzing them to a certain degree from doing what God has called them to do. It not only happened to these Godly men, it is still happening today! God has called you to do something in the church but you are afraid that you aren’t qualified. You are gripped with fear because you are afraid of failing so you don’t even try. It happens. It has happened to me in all kinds of ways and most likely it has happened to you. But the big question is does it have to be this way? No it doesn’t!

The Truth!
Do to the fact that the Father is all knowing, He knew how fear would totally and completely de-rail our lives when it comes to serving Him. Not only does He know how it affects our lives, He did something to help overcome our fears! God Almighty encourages us throughout His Word! He encouraged Joshua not to fear in Joshua 1. He told Gideon not fear in Judges 6:23 and Jesus told the disciples to fear not when He came to them walking on the water!

If encouragement wasn’t enough, the Father did something completely amazing for us! Listen to what Paul wrote to a young pastor named Timothy: Paul said: “for God gave us a spirit not of fear but of power and love and self-control.” 1 Tim 1:7 (ESV). That spirit that He gave us is His Holy Spirit! My friend God has equipped you through the Holy Spirit so that you can do anything that He has called you to accomplish! That is why John writes us in 1 John 4:4 that “He who is in you is greater than he who is in the world.”