The Voice: It isn’t Just a Reality Show 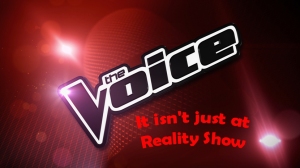 I like watching reality TV shows that are based on competitions.  I must confess, that I have never watched the music reality show “The Voice.”  The closest that I have come to watching it has been the few videos on Facebook.  During the first episode of the show, the judge’s backs are to the contestant so that the only thing they can judge is the contestant’s voices.  As the contestants sing, they try to win over one of the judges with their voices so that they will be chosen to be mentored.   This is nothing new as it is with most of the reality TV shows today; they all have the same basic concepts.  Contestants are trying to be heard or seen by using their “voices” i.e. their words, actions or talents.  However, long before “The Voice” aired, actually even before television, there was someone else who used his voice to win people over to his cause.  His name was Paul, and he used his voice, time and time again, to try to win those around him to the saving knowledge of Jesus Christ!  Paul did all he could so people could hear about the life changing message of Jesus Christ. Paul also encouraged us that we need to make the most of every opportunity, because the days are evil (Ephesian 5:16).  I agree with Paul! I think we need to do all that we can to reach people with the Gospel of Jesus Christ! So how do we make the most of every opportunity? We use our “Voice” to influence those who are around us.  I once heard someone say: “Everyone influences someone whether they realize it or not, and it will be either for the good or for the bad.” That statement has always stuck with me.  Our spouses, kids, friends, and co-workers are watching the things we do and listening to what say.  What they hear and see can and will influence them in their lives in one way or another!

I was reminded of this truth recently.  A couple of years ago I was invited to preach one night of our associational church camp.  The night I preached, I shared how we all are “Created for Something More” from Ephesian 2:10.  After camp was over, I had heard that there were several who surrendered to the ministry. However, until last week I had no idea that God had used my voice to lead a young man to surrender to the ministry.   I found this out when this young man replied to a post that I made on Facebook.  Here was his reply to my post: “Amen. I want to thank you because I am preaching now. Without you preaching the Word at church camp that night nearly 2 years ago, I wouldn’t be where I am now. Thank you.” WOW! I was almost in tears as I read his words.  I really don’t know this young man; I only really know his name because he goes to school with my son.  I also found out that he had preached his first sermon the previous Sunday.   I was completely humbled by the fact that God would use my voice to influence this young man to preach the amazing message of the Gospel! I know it was nothing I did, it was completely and totally God who did the life changing work in that young man’s life. God called him to preach, but He chose to use my voice to accomplish His plan.

What I realize now more than ever is that everyone has a voice.   God has created each of His children with a voice. He wants us to use our voices to point others to the life changing message of Jesus Christ.  There are many different ways that God has created us to use our voices!  I use my “voice” to proclaim the Word through preaching/teaching. Others have the voice to sing, others are gifted with words for writing songs or poetry. Others use their written voices on things such as on a blog or they become an author.  The list can go on and on, but the question that everyone needs to ask is: “Am I making the most of every opportunity by using the voice that God has given me to point people to Jesus Christ?”  If not, I encourage you to find your voice no matter how small you might think it is and use it as much as you can for the Glory of Christ!

I would love to hear from you! What “Voice” has God-given you to be used for His Glory?

3 responses to “The Voice: It isn’t Just a Reality Show”